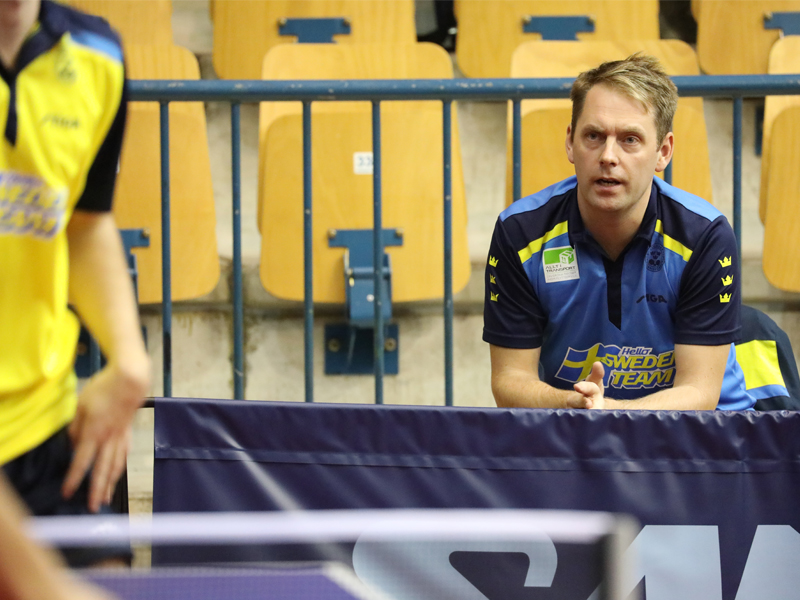 First person to get interviewed is the national coach of the Swedish team, Daniel Ellermann.

Q: It is the first time we get to see the Swedish para-stars on high international level playing on home soil. What impact do you think that might have on their performance?
A: I think that playing on home soil with the support of families, friends and the rest of the crowd will be of great advantage to our players and coaches.
We tend to step up during championships with the extra support from our loved ones and now that even more supporters will be there to cheer the players on, I think that might be the deciding factor in the clutch moments.

Q: What is your goals and ambitions with the upcoming championship?
A: First of all I want my players to reach a high level as far as their table tennis is concerned and that they will be well prepared. From that there will hopefully come medals.
It is difficult to set an exact number of medals we aim to claim but if we succeed as well as we did during the last European Championships or even better I will be very satisfied.
When it comes to para-table tennis as a whole I hope that an event as big as this in Sweden will help us grow as a sport.

Q: What is your personal experience and results from earlier championships?
A: I came in charge as national coach for the para national team in 2009 and this will be my 12th championship in that role. During this time we have managed to win 59 medals in international championships.
So far, Paralympics in London 2012 is the best tournament we have made in my opinion where we took five medals and one of them was a gold.
During the last European Championships we also performed well and won seven medals.

Q: It is not the first time you will visit Helsingborg because of table tennis. How has your earlier meetings with the city been?
A: My previous visits to Helsingborg have only been positive! The yearly Rekordspelen (the club’s big competition) is always well arranged and the many championships that has been held has been great as well.
The city feels like a nice, familiar ”small big city”

Q: If you get to point out three players, both Swedish and non-Swedish players, that you think are worth keeping an extra eye on, who will they be?
A: There are several players worthy to keep an extra eye on and that makes fantastic performances by their prerequisites.
However, I chose three Swedish players:
Anna-Carin Ahlquist – Our own Paralympic gold winner. A real fighter and champion!
Alexander Öhgren – Has an incredible feeling and can pull of the most jaw-dropping shots!
Daniel Gustafsson – A worth seeing defensive playingstyle which you will see from back-court. He will certainly provide some great rallies that you do not want to miss!

Q: How will you prepare for the upcoming tournament?
A: Personally I will try to be in as good shape as possible in order to be able to stay focused during such a long time. I will have to be on point when it comes to physical training, eating and sleeping in time well before the championship.
Of course, I will also do my tactical homework and study potential opponents with video-analyzes and stay updated with the latest rules and other information that will apply at the championship.
I will also be in a great and positive mood when I arrive to Helsingborg!

Thank you for your answers Daniel, see you in Helsingborg.